Today we learned that our dossier has made it safely to Haiti and we are officially entered into IBESR. We thought his wouldn’t happen until next summer, so we are overjoyed and happily surprised!!

It will still be months or more than a year before we are matched. The committee to suggest and approve matches for new law families hasn’t even been formed yet, so we really have no idea when to expect a referral.

We continue to rest in God’s perfect timing and trust in His unfailing love for all of us – the Puelstons here in America and the future Puelston in Haiti. A ten month fast-forward feels like a golden ticket right now, and we rejoice in His kindness. He can move the mountain. He is mighty. And we’re so grateful to our wonderful agency for helping us and making every effort to unite children with their forever families.

As I flew back to the USA from Haiti last month, I wrote this letter to our future child.

Today I left Haiti, and a piece of my heart will be there forever. I keep thinking of the song “Thousand Miles” by Vanessa Carlton.

“Somewhere Out There” was playing too: “Somewhere out there, beneath the clear blue sky, someone’s thinking of me and loving me tonight”.

I’m thinking of you, baby. I’m wondering where you are tonight. If you have been born yet, and if you have – if you have a place to sleep that is clean and dry.

Your country is beautiful. It has a piece of my heart that will never return – it will always be planted in the cement grey dust of Ayiti.

I can’t even begin to tell you how much hope I have that Haiti will rise and become stronger and more beautiful in the years to come.

I hope it is not very long before I once again step on Haitian soil and see those mountains and the beautiful bay. Not long until I meet you.

And until then, my love, I will pray. Pray for you. Pray for Haiti. Pray for the people who know you. Pray that you will be safe and protected from the evil that lurks for parentless babies. I pray that someone tells you how very much you are loved. I ask Jesus to write your name on His hands and send his angels to guard you. May your tummy have enough food to keep the hunger from being too deep. May you be able to drink clean water. May you have friends to play with and a place to lay your precious head.

And when we do finally make the journey to bring you home to our family, I promise I will hold you. I promise I will cry with you as you grieve for what you’ve lost and try to make sense of what you’ve gained. You are a treasure and we will be a family that always loves and honors Haiti. Always thanks God for your first manman and papa.

This letter to you is sealed with the many tears I cried as I flew home from your beautiful Ayiti. When you are ready, we will go back and visit. We will see your home and see your people. You will always be free to know where you came from and who loved you before us. And if we don’t know, I hope your heart will rest in what is true now: I love you. Your daddy loves you. Your brothers and sister love you.

Whatever happens, however you feel, whatever you do – you will always be loved.

I woke up after that weird first night in a new place sleep…and gathered my thoughts. “Where am I again? Oh yeah, Haiti. I wonder what this day will be like. Will I handle the heat okay? How much bug spray do I need to bring? Am I going to lose it when we pull into the slum today?” I smelled breakfast cooking and coffee brewing.

It was 8am and already the air was toasty warm in the guesthouse. I met two of the women who supported our team with their delicious cooking when I walked into the dining room – Berlande and Kisnel. Both of them sweet as sugar cane, Berlande was quieter and Kisnel had a wide, infectious smile that shone like the sun.

We enjoyed our breakfast, then prepared for a day delivering water to several neighborhoods within Cite Soleil, one of the poorest places in the western Hemisphere. (You can talk about what it might be like, you can imagine what it will be like, but you are never going to be able to understand it fully until you walk across the garbage and see the depth of the poverty in front of your very eyes.)

We boarded the tap-tap and drove through the streets of Port au Prince to the water station where the HH truck fills up it’s tank. As we waited for the truck, I tried to take it all in again – the heat wasn’t unbearable because there was a pleasant breeze…there was a cloud of smog over the city, shrouding the mountains in it’s haze…I noticed the cement-grey dirt and the man napping in a giant truck tire.

Then with a honk of the water truck’s horn, we were off, bumping our way to Cite Soleil. Our first stop of the day was near the construction site of Hope Church, a church Healing Haiti is building in the worst part of the city. The kids of the neighborhood all started yelling, “HEY YOU, HEY YOU!” (it’s a long story, but they chant that at every Healing Haiti group that comes by) and mobbed the back of the tap-tap as we stepped out.

Small brown hands reached for mine, and quickly entwined mine in a firm grasp. Soon I was holding one toddler in front and one on my back, looking into the eyes of each kid nearby and wishing to high heaven that I’d learned Creole before coming. I did learn how to ask their names, and would tell them mine. “Zjo-hah-nah?” “Oui!” I played patty cake with some and arm wrestled others. The kids were astonished when they discovered I was my mother’s daughter! It was so fun to see their eyes widen when I told them, “She’s my mama! I’m her bebe.” 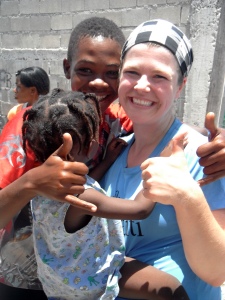 My teammates helped hold the water hose as people queued up to fill their buckets, tins, and bowls. Others helped carry sloshing, heavy buckets back to their homes. Some of us simply held kids. One little girl would not let go – she clung to me like a little sloth baby on it’s mother. She even smacked other kids who tried to come up and get my attention or my hands. It was clear I was her person for the moment and she wasn’t willing to share.

Our translators walked us up to the Hope Church construction site and it was so wonderful to see this beautiful concrete structure rising out of the literal garbage heap. When all is completed, there will be a church and a school in the darkest corner of Cite Soleil. Another place from which God’s love will spread, pouring out into a community that so desperately needs grace, hope, and joy.

My deaf teammates taught the kids to sign “I love you” and as we pulled away and went on to the next stop, one boy who had stuck close to me, Delmon was his name, yelled for me and forced his fingers into the ILY sign. His big smile frozen forever in my heart and mind, we bounced down the street and back to the water station to refill for the next stop.

At the second stop, I was surprised to see the ocean open in front of me at the end of the street. I had forgotten we were so close to the bay. A toddler girl, not much older than my Grant, fussed and vied for my attention as we walked to the back of the water truck. I scooped her up, bare bottom and all, and sang her a little song and asked her name. She didn’t understand or didn’t want to share, but no way did she want to be set down.

Later I helped other girls put their water buckets on their heads and watched them walk carefully, back so straight, head so high, returning to their home. I helped several kids and some mothers with their buckets, and had a conversation with a young man who spoke a little English. I wondered about the kids and the people I was standing near. “Would the boys grow up to be good men? Will they take care of their families and be kind to their wives?” “Will the girl next to me be pregnant within the year or will she get to enjoy the innocence of her youth a while longer? When she is pregnant, will she have good prenatal care? How big will her baby be? Will she know how important it is to try and breastfeed him?” “Do they know about Jesus? Who will tell them about His love?”

At the final stop of the day, after our own pit stop at a police station bathroom (the grossest one I used in the whole country), after making sure everyone that needed water got theirs, we took a little walk through the neighborhood. I felt as conspicuous as I was, following Michael, the HH staff photographer, down alley and over drainage ditch. We squeezed through narrow, hallway like walking paths between the corrugated metal homes. I saw one house with a port-a-potty front panel for it’s front door. Ingenuity and recycling at it’s finest!

As we walked, trailing neighborhood children and carrying the barefoot ones, I greeted women on their front stoops with “bonswa!” and always received the same in return. Eventually, the narrow path opened into a wider one, which opened into a clearing on the outskirts of the neighborhood. We were on the edge of the bay, no beach to be seen, only the murky sea water meeting garbage several feet deep and shards of seashells. I could see pigs wading in the shallow water, men fishing a few hundred yards away, and in the far distance, shipping derricks ready to receive containers. 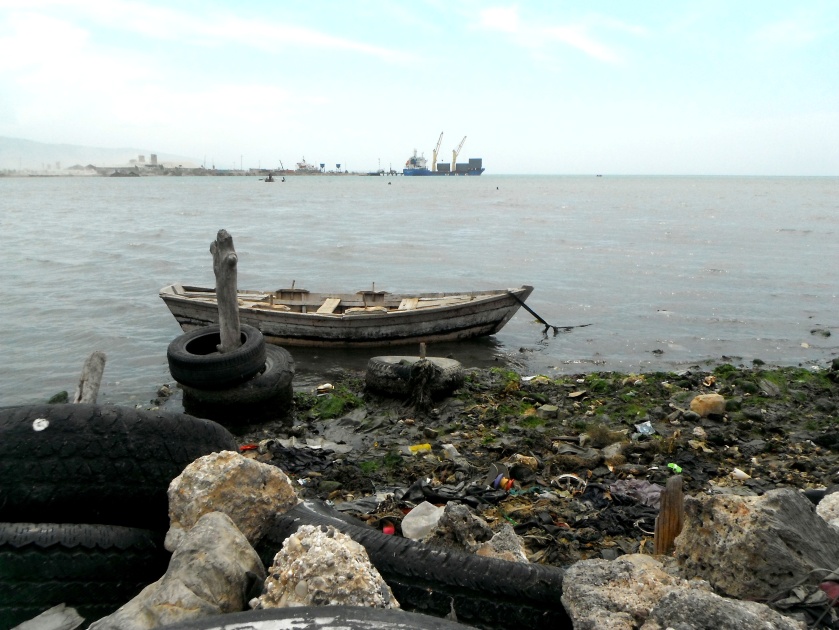 It got quiet. We all were trying to process what we were experiencing…what is “normal” for the kids that were in our arms…how hard it is to scratch out an existence in this tiny, but densely populated place. Then we turned and walked back to the tap-tap, pausing on the way to give a sweet elderly woman a Creole Bible she’d been asking for. Her Bible had been a literal shield not too long ago when she was caught in crossfire during a gang fight. The bullet lodged in it and kept her alive. She received the new Bible with much gratefulness, and we left, quiet and contemplating all we’d seen that day.

Each evening, after a delicious dinner we were always quite ready to devour, we sat and shared a “word of the day”. One word to describe how we felt and what we’d done that day. Tears were often shed, encouragement was given, ideas were shared. It was a wonderful way to connect and debrief the day.

The rest of the evening’s details are fuzzy. I probably took a shower and journaled a bit before hitting my bunk and hoping to sleep well. Tomorrow was another day, and I was a little concerned it might be a difficult one…